Grab a Last Minute Read for Your Professor or Child’s Teacher!

As the holidays are only two weeks away, you want to make sure you take care of all the people that have influenced you or a loved one this year – don’t forget about professors and teachers! You and/or your child spends nearly everyday interacting with an educator, Richter Publishing has just the way to help you thank them! Check out these reads, and grab one as a last minute ‘thank you’ or ‘happy holidays’ today!

Comments Off on Grab a Last Minute Read for Your Professor or Child’s Teacher! 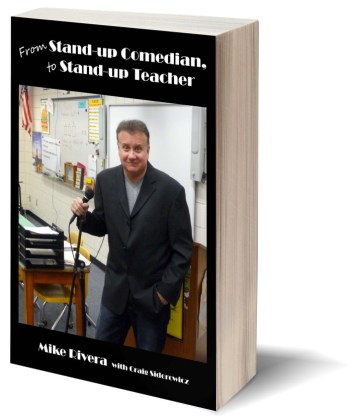 This week’s title spotlight is on Mike Rivera’s book, “From Stand-up Comedian to Stand-up Teacher” with Craig Sidorowicz that was published by Richter Publishing in 2016.

From “Stand-up Comedian to Stand-up Teacher” is the story of Mike Rivera, “America’s Most Hilarious Teacher.” Talented and experienced in the worlds of both comedy and teaching, Mike brings together the unique perspectives of a nationally touring stand-up comedian, and an award-winning teacher, with the purpose of invigorating today’s American classroom. He calls this “The Comedy/Teaching Craft” and “The STAND-UP Strategies.”

Comments Off on Richter Publishing Title Feature, “From Stand-up Comedian to Stand-up Teacher,” by Mike Rivera and Craig Sidorowicz

Richter Publishing is excited to add another celebrity to their list of authors. America’s Most Hilarious Teacher, Mike Rivera, has been a national touring headlining comedian for over 20 years.  Mike has been a regular at all the major comedy clubs across the United States, and has appeared on HBO, ShowTime, and on ABC’s The View where he won America’s Most Hilarious Teacher competition.

For the past Fifteen years, Mike has brought humor to his students as a full-time award-winning middle school social studies teacher.  In his years of teaching, Mike has been recognized for his innovative comedy/teaching approach.

Mike presently lives in Largo, Florida. He is the proud father of two children and dog Maurice.  He is passionate about travel and exploring the world either by himself, or leading student groups overseas. He loves sports and is an avid fan of the San Francisco Giants, Tampa Bay Lightning, and Tampa Bay Rays.

Watch out for his book, “From Stand-Up Comedian to Stand-Up Teacher” to be published early 2016.